Having some cars or trucks can really help to bring your layout to life. They can help to populate your town or factory and help to set your layout in a specific era. Without some of these details, a layout can look really uninteresting and short of the things that brings a layout to life.

I don’t think it’s been hard to find 1:43 scale vehicles as there are some well known companies that make these such as Corgi or Oxford, however, I have found it hard to find some vehicles to suit my chosen era.

The cars in the picture are a Ford Anglia and a Ford Escort. My parents used to have a Ford Anglia when we lived near Thorpe Railway station, however, I’m not sure it could ever fly as I am a muggle! The Escort had a nice shinny coat of red paint when I purchased it, however, if you’ve ever looked at a shinny car beside your layout. It looks like, well, a toy.

In order to do something about it’s toy like appearance, I unscrewed the body from the interior parts and put the die cast body to one side. This was then given a coat of matt varnish and allowed to dry before re-assembly.

The effect of the mat paint, really helps the model to blend in with its surroundings and scales down the paint finish to help. While the scene isn’t finished you can see the difference between the two vehicles as the Ford Anglia has not had the matt varnish treatment yet. 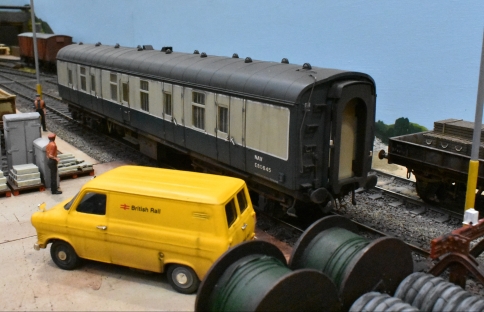 On Morlock Heath built by Kelvin Barnes, a Ford Transit is in the yard with workmen carrying out their duties. For some strange reason, brake carriage has been left there by the resident shunter.

The transit was built and varnished using the same method as the ford Escort above. However, this would have still looked new and under used. I’m sure British Rail had some new vehicles at some stage, but I wanted this one to look anything but new.

The bottom of the van has some dirt sprayed up from the road. With art mimicking real life, I also used the spray from a can to indirectly paint the clean yellow paint.  I placed the vehicle on a piece of card and directed the paint close to the vehicle at the bottom, but I did not spray onto it. The paint then drifted or bounced off the card and onto the model giving it that road dirt look.

Take a look at the petrol cap area on the Transit. I could have left this, but with a bit of thinned paint, dry brushed onto the body, this has been brought alive and adds to the sense of realism. It is this observation and attention to detail that makes modelling so much fun and an interesting hobby. We must keep looking at the real world and keep trying to think about how we can recreate this in miniature. It’s really satisfying when you get it right.